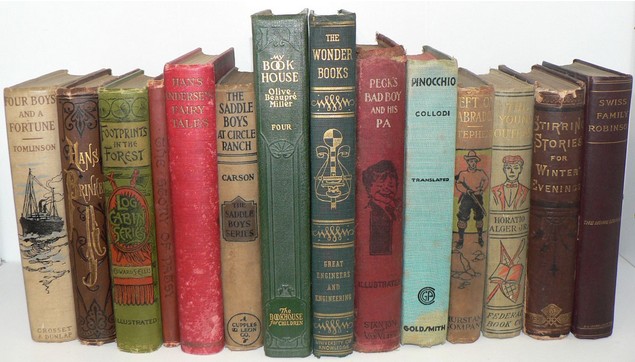 I recently dug up a 1908 curriculum manual in the Minnesota Historical Society archives. It provided instructions on everything from teacher deportment to recommended literature lists for various grades. As a book lover, I was especially interested in the latter!

With the exception of a few textbook-like anthologies, the chart below lists the recommended reading material for Minnesota 7th and 8th graders in 1908: 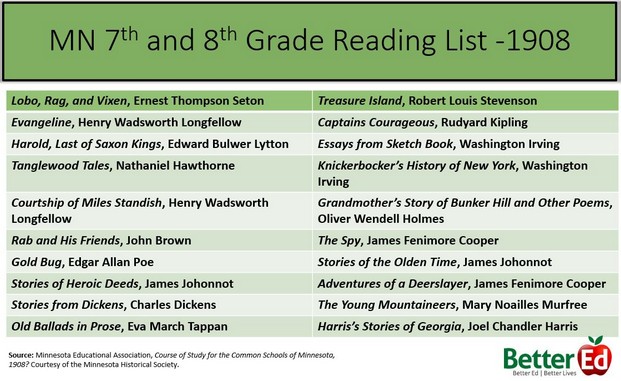 With such a list in hand, I decided to examine if the common accusation that today’s education standards have been dumbed down is really true. To make sure I wasn’t unfairly weighting this survey in favor of the past, I went to one of the Twin Cities metro area's finest districts, namely, Edina Public Schools. Again, with the exception of a few textbook anthologies, the list below offers the reading options for their 7th and 8th grade students: 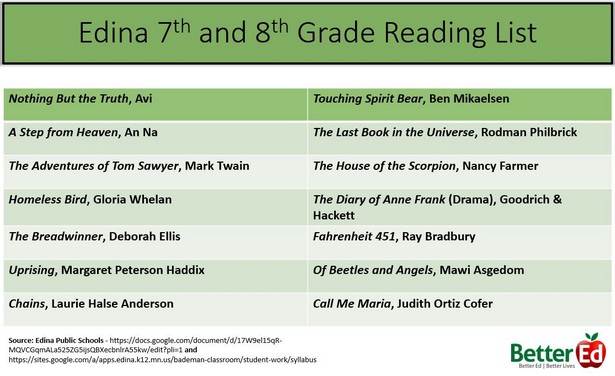 In examining these lists, I noticed three important differences between the reading content of these two eras:

In comparison, over half of the titles on the first list were at least 20 years old in 1908, with many of them averaging between 50 to 100 years old.

Older is not necessarily better, but the books on the first list suggest that schools of the past were more likely to give their students time-tested, classic literature, rather than books whose popularity may happen to be a passing fad.

A second striking difference between the two book lists are the themes they explore. The first is full of historical references and settings which stretch from ancient Greece (Tanglewood Tales) to the Middle Ages (Harold, Last of Saxon Kings) to the founding of America (Courtship of Miles Standish). Through highly recognized authors such as Longfellow, Stevenson, Kipling, and Dickens, these titles introduce children to a vast array of themes crucial to understanding the foundations upon which America and western civilization were built.

The Edina list, however, largely deals with modern history, particularly hitting on many current political and cultural themes such as the Taliban (The Breadwinner), cloning, illegal immigrants, the drug war (The House of the Scorpion), and deeply troubled youth (Touching Spirit Bear). In terms of longstanding, classic authors, Mark Twain and Ray Bradbury are the only ones who stand out.

It’s good for children to understand the world in which they live, but as with any area in life, you can have too much of a good thing. A continual focus on modern literature narrows the lens through which children can view and interpret the world. Would it not be better to broaden their horizons and expose them to a balance of both old and new literature?

Many of the books on the Edina list use fairly simple, understandable language and vocabulary familiar to the modern reader. Consider the first paragraph ofNothing But the Truth:

“Coach Jamison saw me in the hall and said he wanted to make sure I’m trying out for the track team!!!! Said my middle school gym teacher told him I was really good!!!! Then he said that with me on the Harrison High team we have a real shot at being county champs. Fantastic!!!!!! He wouldn’t say that unless he meant it. Have to ask folks about helping me get new shoes. Newspaper route won’t do it all. But Dad was so excited when I told him what Coach said that I’m sure he’ll help.”

On the other hand, consider the first paragraph of Longfellow’s Evangeline:

"This is the forest primeval. The murmuring pines and the hemlocks,
Bearded with moss, and in garments green, indistinct in the twilight,
Stand like Druids of eld, with voices sad and prophetic,
Stand like harpers hoar, with beards that rest on their bosoms.
Loud from its rocky caverns, the deep-voiced neighboring ocean
Speaks, and in accents disconsolate answers the wail of the forest."

The first example uses simple words and a casual sentence structure, while the second uses a rich vocabulary and a complex writing format. Naturally, some might look at the second selection and say, “Good grief! How do you expect a child to understand that?!?”

But that’s the whole point. Unless we give our students challenging material to dissect, process, and study, how can we expect them to break out of the current poor proficiency ratings and advance beyond a basic reading level?

My takeaway from this comparison? It's great that schools today have students read contemporary literature. But we still need to make sure that students also read good literature from the past and are sufficiently challenged.