JaKell Sullivan
JaKell Sullivan l Common Core l No Child Left Behind l Mandates l Regulations l Federal Program l Utah No Child Left Behind Waiver l Appellate Court Judge l Medicaid l Common Core Will Bankrupt the United States l Derek Brown l Budget going for Obamacare l Federal Mandates l Common Core State Led l Legislative Session l Resolution l 2009 Started Common Core l 2013 Resolution Support Common Core State Standards Written in 2009 l  Chaka Fattah Revolutionist Changed his name in the 1960 Community Organiser Behind Push Getting Governors to hop on board for Common Core before the Standards were written. l Built a Consensus for Common Core  bypass the State Legislators l Plans are for common core to evolve into content standards - President Obama's  l Linda Darling-Hammond Social Justice Educator believes in the Redistribution of Wealth Local Tax Monies written the agenda reports for Obama during campaign Education Advisor she is also behind Texas's Curriculum Cscope, Texas did not sign on to Common Core and went around the legislative process and actually got teachers to sign non-disclosure agreements that they would not share the content of the curriculum it was all online. Cscope looks/appears appears what common core is suppose to evolve into which is very anti-American l Senator Dan Patrick exposing cscope/common core l Google Cscope l Common Core is PRO Islamic, Chart showing how they will move people from capitalize to socialize to communism l Bypass State Legislatures and Push Mandates Down to State through Race to the Top and the No Child Left Behind Waivers to idea is to create these public/private partnerships where so that they can start to redistribute local tax monies l Report JaKell Sullivan report she is pulling this information from: Obama's Equity and Excellence Commission Report, Obama's Blueprint for Reform, 2020 Vision Roadmap written to fulfill Obama's Education Agenda where they want to go with the New Federal Framework for education which is public/private partnerships, Obama's February 2013 State of the Union Speech l 2009 Formed Education Excellence Commission. l Where is the parent in the public private partnership?  Where was the parent when the government/states said they were going to sign on to this? The government/states is functioning outside our system of government. In the equity and excellence commision report they actually talk about the fact that common core went around government structure and that they want to use that for everything else there going to do l business are not accountable to tax payers so weather common core succeeds or fails when all these mandates start coming to the states were left out.  Our tax monies go to it.  If it fails we have no recourse. l Linda Darling-Hammond how deeply involved she was in common core: Start video at 23:00/refer to chart below She had 2 schools in California that were failing schools that they had to close down, she is opposed to standardized tests and written very extensively on that yet she is in charge of 1/2 the country testing. Her charge is how to equitably re-distribute tax monies, 2020 Vision Roadmap - When they talk about they they talk about holding back Title I monies till they can get everyone inline. l Chaka Fattah - He has got a plan for where the $1Trillion In annual Discreationary Funds monies are going to go, May 15, 2009 he sponsored a bill where it is the whole reform idea there going to mandate the states where we are going to have to have all these things and ther going to set the requirements of what those things are. l Secretary Duncan has spoke how they are going to have to have a teacher court, a principal court, resources are not just the moving around of tax money but their the moving around of...the hiriing of superintendents, principals and teachers and spreading those resources around the way they want federal government want them to do it. l STEM - Chaka Fattah believes why we are creating STEM jobs its more about controlling what chidlren's opportunities are going to be.  The private infastructure are going to decide we are going to have these kind of jobs available and we want this many people pushed in to them and were going to create a teacher for and in 10 years were going to have 100,000 teachers teaching standards and their going to have an annual $20,000 year cycling for the federal government to get in to each teacher. l Referring to the Presentation: Government reforms must ensure coordination and cooperation across federal, state, and local agencies. This Alignment is critical for example when it comes to providing health care and social services to students in our schools. "This All Ties in with the Data Collection by presentor Crystal"  Audience memeber: Video clip she watched where Arne Duncan was talking about the end goal being for our schools to eventually becoming community centers where our children will spend 6 days a week 12-13 hours a day all 3 meals will be distributed to them any health care needs will be distributed to them at these centers l What are we doing?...Why are we allowing these mandates to come down from the federal government and tell us the way we are going to use our local monies and how we are going to use our resources and where our superintendents, principals and teachers are going to come from because they now have private partnerships for superintendents academies. l The Constitution gives the power of the states for the administration and funding of education the federal government does not have this power what politician remind Arney Duncan that the sestemic change they crave is illegal. Have all the local politician on the local state and national levels forgotten the federal government has no right to this power.  MORE VIDEOS 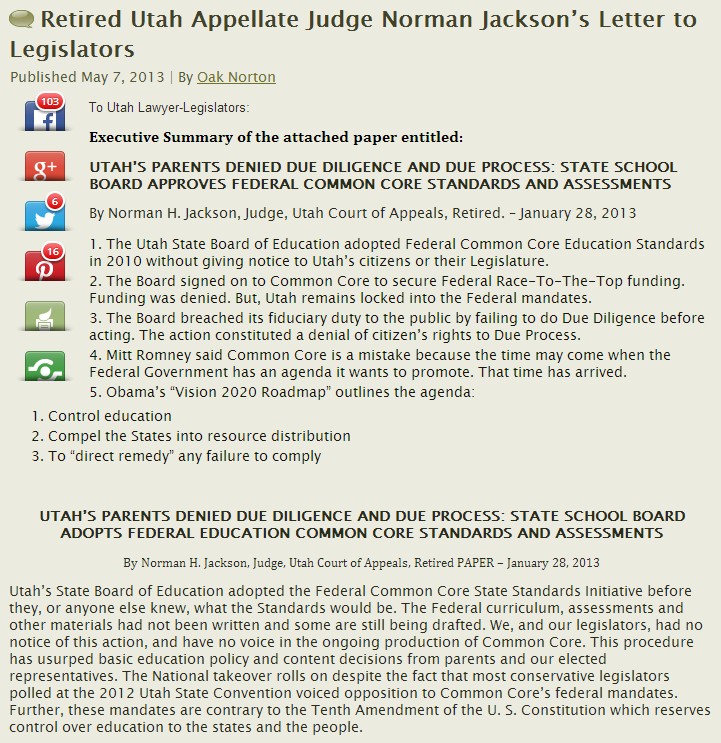 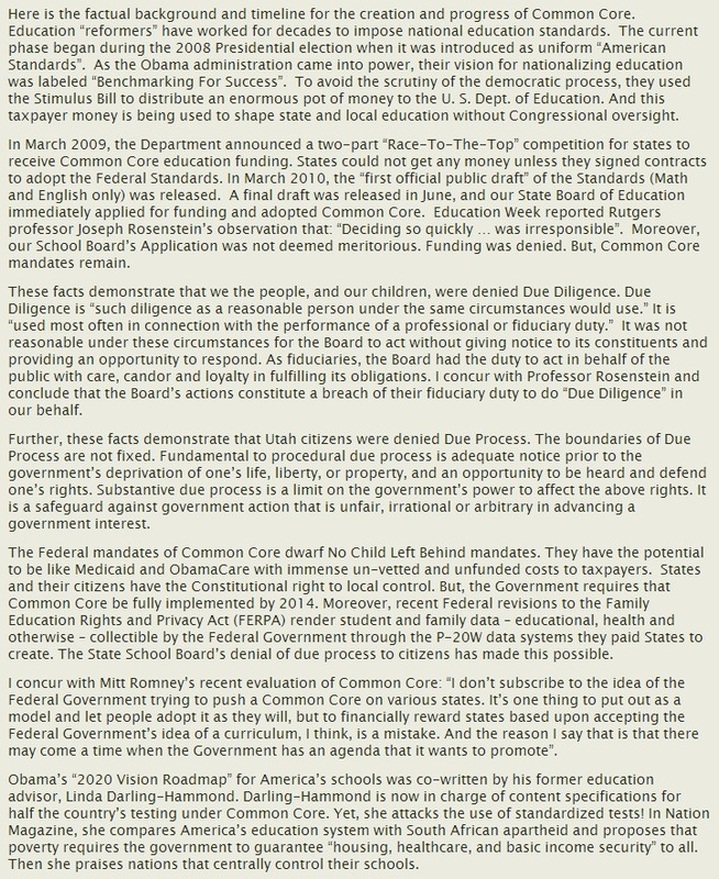 In March 2009, President Barack Obama gave governors $53.6 billion from the “State Fiscal Stabilization Fund” contained in the federal stimulus package. The money was to be used in exchange for the adoption of four federal K-12 education reforms. These reforms constitute a massive new education entitlement program similar to Obamacare, and a dismantling of local control over education.

Governors were directed to spend the funds “quickly” in order to bolster the economy. This directive has allowed the federal government to remake K-12 education in three years time without public knowledge, without using our representative form of government and without vetting the ongoing costs to states.

The US Department of Education’s website details the four federal education reforms that 46 states are almost done implementing:

These reforms sound somewhat innocuous until one starts reading the federal government’s Race to the Top grants to states and school districts, the Elementary and Secondary Education Act flexibility waivers, the President’s Equity and Excellence Commission’s “For Each and Every Child” report and his “2020 Vision Roadmap” for education reform.With help from these and other original source documents, the translation of the reforms appears to be:

1. Adopt 2-Year college and job ready national standards to ensure that college diplomas are “equitable” and more attainable to the masses through a Common Core that is not internationally benchmarked.

Use federally-required Computer Adaptive Tests that will not be accessible to local teachers or administrators — or parents at a set point after they are given. Meanwhile, federal reformers are remaking America’s entire testing system by aligning all K-12 testing — including the GED, SAT and ACT — to Common Core so that subjective questions can assess real world knowledge as the means for social change. This overhaul is being orchestrated by the new head of the College Board, David Coleman, who is considered the architect of Common Core.

The federal executive branch revised regulations within FERPA —privacy law — so that data tracking could occur without Congressional approval and so student identifiable data can be shared with stakeholders without parental consent. According to the Data Quality Campaign, student data should be linked with health, social services and criminal justice data systems.

The federal government’s idea of “highly effective” teachers means people who complete 5 weeks of training through Teach for America, or teachers who are accredited in programs dedicated to equit, diversity and social justice — not student achievement.)

This explains why West High and other outstanding schools recently received failing grades. They are “underperforming” in equity measures. The system is not set up to evaluate the student achievement that local parents value, but rather the equity measures that social justice reformers demand.

Infographic: How the Common Core Doubles Down on No Child Left Behind
Source: http://truthinamericaneducation.com/common-core-state-standards/infographic-how-the-common-core-doubles-down-on-no-child-left-behind/ 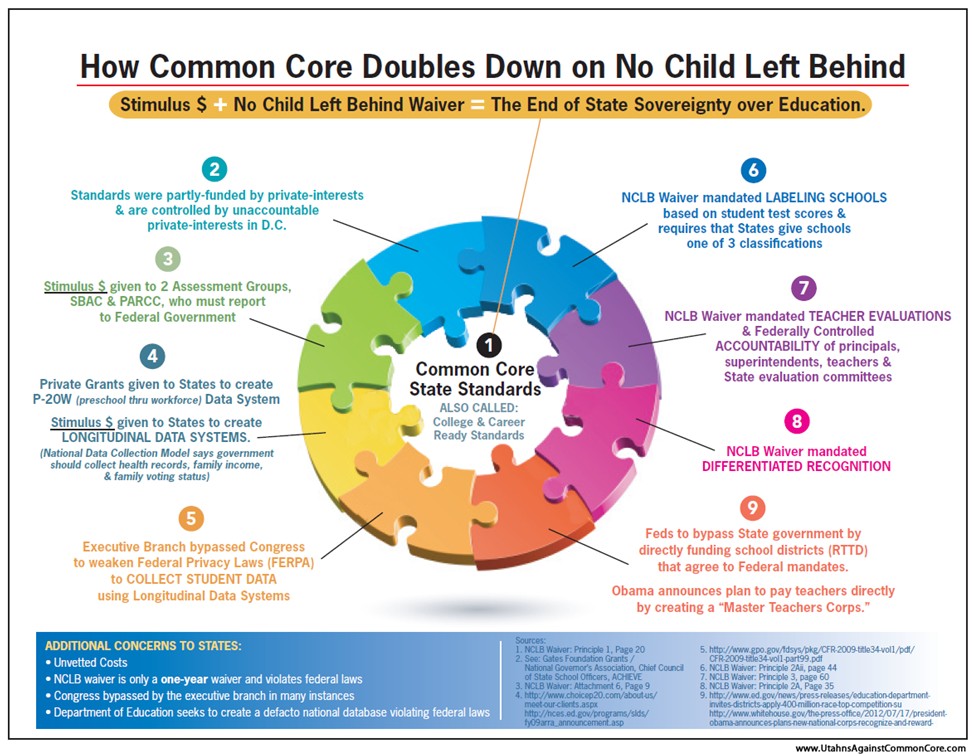